During the 20th century beautiful cottonwood and Goodding’s willows gallery forests rapidly developed along the Upper San Pedro River and greatly changed its appearance. These native trees were much less frequent along the Upper San Pedro River in the 19th century. Many riparian areas had no trees or had species not currently common along the river.
To become established, cottonwood and Goodding’s willows seedlings need unshaded, unvegetated moist mineral or alluvial substrates (Scott et al., 1996, p. 328; Stromberg, 1993, p. 98-99; Stromberg, et al., 2009, p. 16; Webb et al., 2007, p. 23). They cannot survive under an existing stand of trees because they are intolerant of shade and germinate poorly in plant litter. Favorable habitats typically occur within arroyos.

Massive floods create the arroyos. Subsequently, large winter or late fall floods erode and redeposit sediments and create a patchwork of potential seedbeds by depositing sediments along the outer margins of arroyos. After such winter floods, there typically are high flows in the spring and early summer that supply moisture essential to sustain young seedlings. (See https://scihistory.info/hist-massive-storms-that-cut-arroyos.html for description of massive floods along the San Pedro River.) 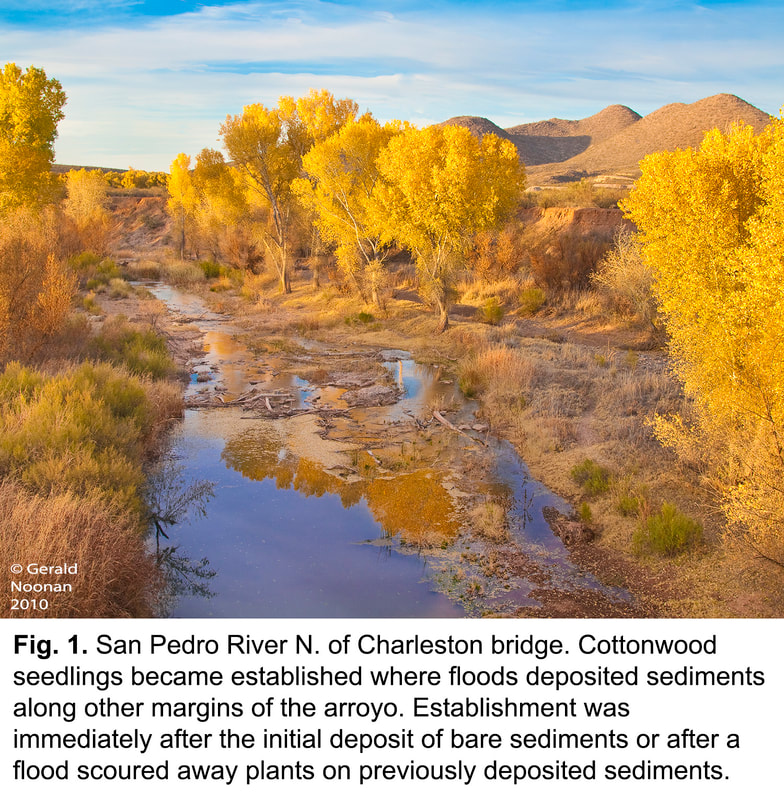 At least six prehistoric and one historic cycle of arroyo cutting occurred along most southwestern waterways (Waters and Haynes, 2001). Data for this conclusion mostly came from stratigraphic studies of tributaries of the San Pedro River, primarily Curry Draw and the Lehner Ranch Arroyo, the San Pedro River main stem, and the Santa Cruz River. At the start of each cycle, southwestern waterways in most places were scarcely cut into the surrounding countryside and mostly lacked arroyos. Data from the recent episode of arroyo downcutting show that arroyo formation and widening, and the joining of arroyos can occur within the span of only a few decades (Webb and Hereford, 2010). Episodes of arroyo maintenance and the later filling of arroyos with sediments can each last for many centuries (Mann and Meltzer, 2007).

When Anglo-American settlers first arrived, many southeastern Arizona waterways that now are sunk into arroyos lacked such arroyos in most places and had many more marshy areas than now (Hastings, 1959, p. 63-64; (Hendrickson and Minckley, 1984; Malde and Scott, 1977, p 39-40). Valley bottoms provided inefficient and hydraulically rough channels that retarded and spread floods, promoted the sinking of water into the ground, and moderated peak discharges (Cooke and Reeves, 1976, p. 4). During normal floods, water simply spread out over the adjacent countryside without usually causing extensive damage. There were fewer opportunities for the scouring floods that cottonwoods and Goodding's willows require.

The Upper San Pedro River did have localized places where the river was sunken between steep banks. For example, in September 1851 the river had banks 8 to 10 feet high near Dragoon Wash in the St. David area (Bartlett, 1854, p. 376-379, 421-424 abs.), and in approximately 1880 the San Pedro River and washes that drained into it were deep enough between Lewis Springs and Charleston to hide anyone who rode down these waterways (Rose, 2012, p. 172). It is not certain whether these localized entrenched areas had become incised as a forerunner of the main episode of historical arroyo formation or whether they represented places where the deposited sediments had not completely filled arroyos formed during prehistoric episodes of arroyo formation.

Cottonwoods and Gooding willow’s occurred at scattered places along the Upper San Pedro River, such as at Lewis Springs (See https://scihistory.info/hist-lewis-springs.html). However, most places had unsuitable conditions for establishment of cottonwoods and Gooding willows. Alluvial water tables were relatively high, especially in the frequent marshy places. The high-water tables near the river and the lack of oxygen in the soil contributed to a lower abundance of trees (Stromberg et al., 2009, p. 16).

Massive floods that began in the 1880s started washing away former habitats and creating the arroyo now found along the San Pedro River (Hereford, 1993, p. 14; Hereford and Betancourt, 2009, p. 238). The first published record of arroyo formation along the San Pedro River was a heavy rain in August 1881 that washed away the Gird dam upstream of Charleston, resulting in water from the dam widening the channel at Charleston (Rose, 2012, p. 62). Heavy rains in 1881 caused an overflow of the active river channel and erosion of the terrace on which Charleston was built. The approximately 20 miles of river between Fairbank and Hereford was probably entrenched in less than 18 years between the 1910s and 1920s. Further entrenchment of the river occurred during September 1926 floods-- the greatest gauged to date for the river. The river channel at St. David was 59 feet wide in 1918, 151 feet wide in 1922 and widened to 351 feet during the 1926 floods. Webb et al. (2007) concluded that by the mid-1890s an arroyo spanned the length of the San Pedro River. Information about the massive floods is at https://scihistory.info/hist-massive-storms-that-cut-arroyos.html.

The exceptionally large floods associated with turn-of-the-20th-century arroyo cutting and channel incision removed most of the vegetation from the river channel, including cottonwood and willow trees (Stromberg, 1998). The 1926 flood-of-record was especially important in removing riparian vegetation. The formation of an arroyo along the San Pedro River resulted in the previously high-water table levels near the San Pedro River lowering to approximately the depth of the arroyos as water drained away through the arroyos (Cooke and Reeves, 1976, p. 4; Webb et. al., 2007, p. 406). (This natural reduction of water table levels differs from the current human caused cone of depression created in the regional aquifer by pumping of water. The slight lowering of water table levels near the river to approximately the depth of arroyos did not threaten the existence of the river. In contrast, the cone of depression created by pumping of water is at a much deeper level and does threaten the existence of the river.) Waterflow became relatively more "peaked" and of shorter duration.

The deposition of sediments along the margins of the arroyo began to provide favorable habitats for the establishment of cottonwoods and Gooding willow’s beginning with approximately the 1920s-1940s (Hereford, 1993, p. 17-20; Stromberg, 1998, 140-143; Stromberg et al., 2009, p. 16-18; Webb et al., 2007, p. 406). Most of the San Pedro River cottonwoods and saltcedars date (Fig. 2) to years with winter (October-March) floods in the post-1960 era (Stromberg, 1998, p. 16-18; Stromberg et al., 2010, p. 1183-1187). Climatic fluctuations associated with the El Niño Southern Oscillation in the Pacific Ocean, resulted after 1960 in weather patterns that created flood flow regimes more favorable to riparian tree establishment. Increased fall and winter floods encouraged the germination and growth of tree seedlings while decreased summer thunderstorms favored seedlings survivorship. The greatest establishment of current cottonwoods was during the 1960s. 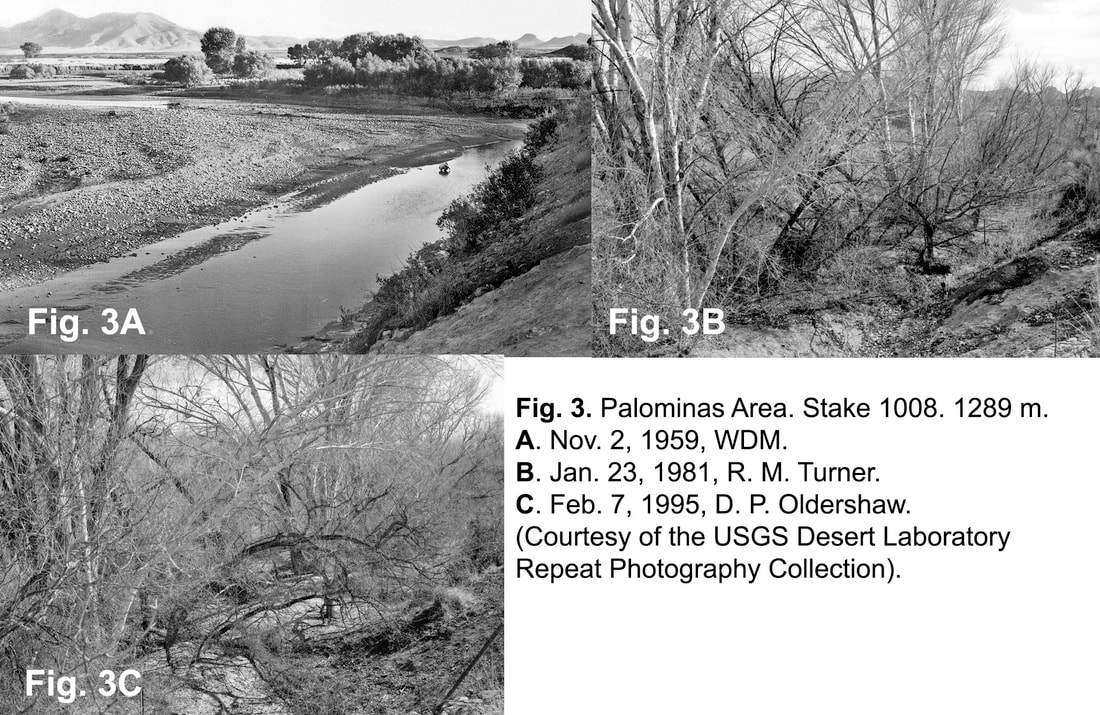 The San Pedro River and other southwestern waterways have a lifecycle somewhat analogous to the mythological Phoenix bird. However, these waterways are liquid rather than fire phoenixes. Each riparian habitat stage in time gives way to another habitat stage whereby the waterways continually replenish themselves. Water is the lifeblood that allows the existence of the current assortment of riparian plants. It also is the driving force behind the naturally occurring arroyo cycles and the natural succession of riparian habitats. If humans refrain from removing water from the San Pedro River Valley, the river habitat will continue to follow its repeated progression through such cycles. The river will remain a dynamic and ever-changing liquid Phoenix.